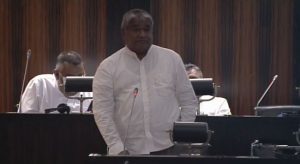 Delivering a brief statement in Parliament, MP Faizal Cassim said that the three MPs including himself have decided to withdraw their support to the government with effect from today.

Cassim expressed his gratitude to the MPs and ministers who had assisted him when he was with the government.

However, he said the government had not listened to or considered their requests with regard to the prevailing crisis in the country.

MP Faizal Cassim, Ishak Rahuman and M.S. Thowfeek were elected to Parliament after contesting under the Samagi Jana Balawegaya (SJB).

However they had later decided to support the government during the vote on the 20th Amendment to the Constitution in October 2020, along with six other SJB MPs. – ada derana