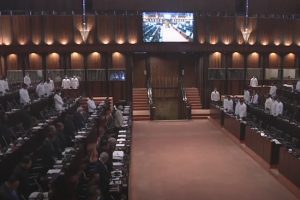 The parliament has observed a minute of silence today (April 21) in remembrance of the victims of the brutal carnage on 2019 Easter Sunday.

The minute of silence was observed following a request made by Opposition Leader Sajith Premadasa, after the commencement of parliamentary proceedings.

The Opposition Leader made the suggestion after Speaker Mahinda Yapa Abeywardena told the House that he has been informed a request to observe a minute of silence cannot be allowed.

The Speaker stated this turning down a request previously made by SJB MP Hector Appuhamy.

However, the Opposition Leader, delivering his parliamentary speech, stressed that one-minute silence should be observed in the House.

Sri Lanka marks one of its darkest days in history today, with the third commemoration of the deadly Easter Sunday terror attacks which claimed the lives of more than 260 and injured at least 500 others. – ada derana