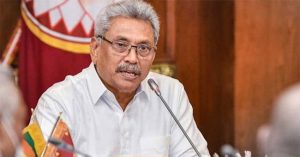 The first meeting of the newly-appointed Cabinet of Ministers will be held today (25), under the patronage of President Gotabaya Rajapaksa.

The Cabinet meeting is scheduled to be held at 5.00 pm at the Presidential Secretariat in Colombo.

Although the new Cabinet was sworn in on the 18th of April, no cabinet meeting has been held so far.

However, the gazette notification regarding the scopes, priorities, affiliated institutions, and legal frameworks of each ministry of the new cabinet is expected to be issued today.

Meanwhile, the draft of the 21st Amendment to the Constitution is due to be presented to the Cabinet today.

It is reported that Prime Minister Mahinda Rajapaksa is scheduled to present the relevant proposal to the Cabinet.

The 21st Amendment to the Constitution is to be introduced and it is planned to curtail the executive powers under the 20th Amendment.

Meanwhile, it is reported that the Speaker has handed over the proposals submitted by the other parties in Parliament regarding the 21st Amendment to the Constitution to the Prime Minister.

Accordingly, the relevant proposals are to be submitted to the Cabinet as well. – ada derana