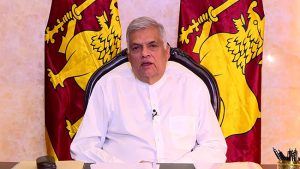 He stated that last Thursday, he had accepted the Premiership of Sri Lanka.

“I did not ask for that position. In the face of the crisis situation in the country, the President invited me to accept this position,” he said.

At this moment, Sri Lanka’s economy is at a very dangerous position, the PM said.

He said government expenditure for the rest of the year is Rs. 3,300 billion, however due to several reasons and extra expenditure it has climbed to Rs. 4,000 billion.

He added that a decision was taken by the Cabinet of Ministers yesterday to table a proposal in parliament to increase the approved issuance limit of treasury bills from 3,000 billion to 4,000 billion.

He said Sri Lanka’s foreign exchange reserves were USD 7.5 billion in November 2019, however today the treasury is unable to find even one million US dollars.

He said the Ministry of finance is finding it difficult to raise USD 5 million required to import LP gas.

Wickremesinghe said that amidst all these issues the country is faced with several grave concerns. He said to ease the queues, they must obtain approximately USD 75 million within the next couple of days.

“At the moment, we only have petrol stocks for a single day,” he said, adding that due to the diesel shipment that arrived yesterday, the shortage of diesel will be resolved to some extent.

He stated that under the Indian credit line, two more diesel shipments are due to arrive on the 18th May and 1st June. In addition, two petrol shipments are expected on 18th and 29th May.

The PM said that for over 40 days three ships with crude oil and furnace oil have been anchored within the maritime zone of Sri Lanka. We are working to obtain dollars in the open market to pay for these shipments, he said.

The prime minister said that currently a quarter of electricity is generated through oil and that therefore, there is a possibility that the daily power outages could increase to 15 hours a day.

“However, we have already obtained money to avert this crisis. We must also immediately obtain USD 20 million to provide gas to consumers,” he said. The PM said the situation of kerosene and furnace oil is even more urgent.

He said at present, the Central Bank, local state and private banks, and foreign banks functioning in Sri Lanka are all facing a dollar shortage. “As you are already aware, we possess a very low amount of US dollars.”

Nevertheless, he said that they succeeded in bringing in a diesel shipment yesterday despite these adverse circumstances with Indian assistance. Therefore, you can obtain that diesel from today onwards, he said.

He said they will also work towards making a payment for the gas shipment that arrived on Tuesday. Therefore, the public will have some respite from the gas shortage, he said.

Another grave concern is the lack of medicine, the prime minister said. There is a severe shortage of a number of medicines including medicine required for heart disease as well as surgical equipment, he conceded.

He said payments have not been made for four months to suppliers of medicine, medical equipment, and food for patients while the payment owed to them amounts to SLR 34 billion.

In addition, payments have not been made for four months for medicine imported by the State Pharmaceuticals Corporation. As a result, pharmaceutical companies are taking steps to blacklist the SPC, he said.

“Unfortunately, our Medical Supplies Division is unable to provide even two critical items of the 14 essential medicines that we currently need. These two are a medicine used in treating heart disease and the anti-rabies vaccine. The latter has no alternative treatment.”

The PM said they have planned to present a new alternative budget to the development budget proposed for 2022. Intend to present it as a concessionary budget.

He further proposed to privatise Sri Lankan Airlines which is incurring extensive losses. The loss for the year 2020-2021 alone amounts to SLR 45 billion. By 31st March 2021, the total loss was at 372 billion.

“In the short term we will have to face an even more difficult time period.” There is a possibility that inflation will increase further, he warned.

“Against my own wishes, I am compelled to permit printing money in order to pay state-sector employees and to pay for essential goods and services. However, we must remember that printing money leads to the depreciation of the rupee.”

Under the current circumstances, even the Petroleum  Corporation and the Electricity Board are unable to obtain rupees, he revealed.

“The next couple of months will be the most difficult ones of our lives. We must prepare ourselves to make some sacrifices and face the challenges of this period.”

“I have no desire to hide the truth and to lie to the public. Although these facts are unpleasant and terrifying, this is the true situation. For a short period, our future will be even more difficult than the tough times that we have passed.”

“We will face considerable challenges and adversity. However, this period will not be long. In the coming months, our foreign allies will assist us. They have already pledged their support. Therefore, we will have to patiently bear the next couple of months. However, we can overcome this situation. Doing so will require taking a new path.”

“I thank the opposition leader and the leaders of the political parties who replied to the letters that I sent them informing them of the current situation.”

“We must immediately establish a national assembly or political body with the participation of all political parties to find solutions for the present crisis. This will enable us to discuss with all parties and to arrive at decisions for short-, medium-, and long-term action plans that will enable us to rebuild our nation within a specified time frame.”

“We will build a nation without queues for kerosene, gas, and fuel; a nation free of power outages, a nation with plentiful resources where agriculture can freely flourish; a nation where the future of the youth is secure; a nation where people’s labour need not be wasted in queues and in struggles; a nation where everyone can lead their lives freely with three square meals a day.”

“I am undertaking a dangerous challenge. In the Caucasian Chalk Circle, Grusha crossed the broken rope bridge carrying a child that was not her own. This is an even more difficult undertaking. The precipice is deep and its bottom cannot be seen. The bridge is made of thin glass and there is no handrail. I am wearing shoes with sharp nails that cannot be removed. My task is to safely take the child to the other side. I am accepting this challenge for our nation. My goal and dedication is not to save an individual, a family, or a party. My objective is to save all the people of this country and the future of our younger generation. I will undertake this task willingly risking my life if needed and will overcome the challenges facing us. I ask you to extend your support to me in this endeavour.”

“I will fulfill my duty towards our nation. That is my promise to you,” he said in conclusion.