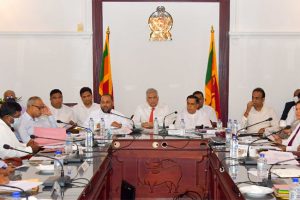 USD 600 million would be required to ensure an adequate supply of fertiliser in the country, Prime Minister Ranil Wickremesinghe has said during a discussion with the representatives from the agriculture sector to discuss the looming food shortage.

The officials have informed that the fertiliser companies would be able to supply the required fertiliser quantities if the banks released the dollars.

The prime minister also explained that he would be presenting a new Act in Parliament, the Essential Agriculture Supplies Act, which would ensure uninterrupted supply and distribution of agricultural materials.

PM Wickremesinghe stated that due to the war in Ukraine the world is facing a wheat and fertiliser shortage. He explained that as the shortages increase, Sri Lanka’s food supplies would worsen unless remedial action is taken immediately.

He instructed the officials to identify underutilized land in the urban areas which could be cultivated.

The prime minister stressed that the situation the country is dire and required a combined effort if we were to overcome it.