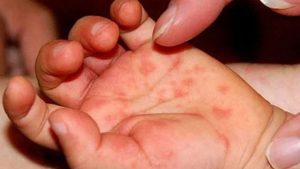 Sri Lanka’s health officials say that a viral infection is spreading among children in several areas including Colombo.

According to pediatrician Dr. Deepal Perera, symptoms including red blisters appear on the body of children infected with hand, foot and mouth disease (HFMD).

He said that the disease spreads easily and children who have been infected once are at risk of re-infection.

The pediatrician also recommended that children with the disease be given paracetamol and allowed to rest at home. He also advises that a child with the disease take a diet or syrup containing zinc.

The doctor said that this is not a deadly disease and that children between the ages of 6 months and 12 years are more likely to get infected.

Dr. Deepal Perera said that the risk of the spread of dengue has also increased and steps should be taken to keep the premises clean with the commencement of schools. – ada derana