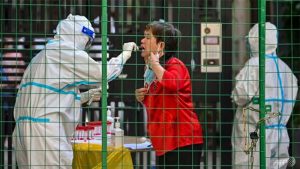 (Reuters) – Shanghai and Beijing went back on fresh COVID-19 alert on Thursday after parts of China’s largest economic hub imposed new lockdown restriction and the city announced a round of mass testing for millions of residents.

The most populous district in the Chinese capital, meanwhile, announced the shutdown of entertainment venues, while news of the lockdown of Shanghai’s Minhang district, home to more than 2 million people, pulled down Chinese stocks.

Both cities had recently eased heavy COVID curbs, but the country has stuck with a “dynamic zero-COVID” policy aimed at shutting down transmission chains as soon as possible.

Shanghai residents in particular are on edge as new cases flare up after the city’s grinding two-month lockdown ended, with officials on Thursday tracing three infections to the Red Rose, a popular beauty salon in the city centre that reopened when the city did on June 1.

The shop had served 502 customers from 15 of Shanghai’s 16 districts in the past eight days, a local media outlet, The Paper, reported.

“When is this ever going to end?,” a user of the Twitter-like Weibo commented on the Red Rose, which is in the trendy former French Concession area of the Xuhui district. “I just want to have a normal life.”

Authorities said a preliminary investigation found that some of the salon’s 16 employees did not undergo daily COVID testing as required, and that 90,000 people linked to Red Rose staff or customers had been tested.

While China’s infection rate is low by global standards, President Xi Jinping has doubled down on a zero-COVID policy that authorities say is needed to protect the elderly and the country’s medical system, even as other countries try to live with the coronavirus.

Shanghai’s two-month lockdown, the shuttering of many malls and venues across Beijing and movement curbs imposed in many cities in recent months have battered the Chinese economy, disrupted supply chains and slowed international trade.

Authorities have been keen to revive business and started to relax some curbs in May which helped China’s exports that month to grow at a double-digit pace, beating expectations, but residents, businesses and investors are wary. China’s blue-chip CSI300 index ended 1.1% lower.

“The business climate is not positive because despite the fact that the cities opened, there is still the problem of the zero-COVID policy,” Christophe Lauras, president of the French Chamber of Commerce in China, told Reuters.

“That is to say that every morning people don’t know if they’ll be locked down,” he said.

LOCKDOWNS AND TESTS
Shanghai’s Minhang district said it will conduct nucleic acid tests for the entire population on Saturday and ordered residents to stay home in the meantime. Six other Shanghai districts, including some of its largest, also announced a round of mass testing for the weekend.

Several local-level authorities in Shanghai, which is home to 25 million people,have also issued notices saying residents will be subject to two days of confinement and another 12 days of rigorous testing starting Thursday.

Many of the notices were in the central Xuhui district, where green fences and red wooden boards have sprung up in the past week, barricading residents in and triggering fresh public anger.

In Beijing, authorities in Chaoyang district, home to more than 3 million people, ordered entertainment venues and internet cafes to shut on Thursday, while patrons of four bars were told to identify themselves and self-isolate.

China reported 240 new coronavirus cases on June 8, of which 70 were symptomatic and 170 were asymptomatic, the National Health Commission said on Thursday.