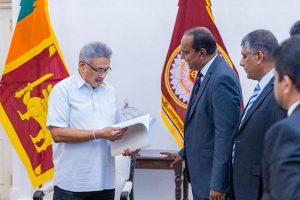 The final report of the Presidential Commission of Inquiry into Sri Lanka Customs was handed over to President Gotabaya Rajapaksa by the Chairman of the commission Supreme Court Judge Shiran Gunaratne at the President’s House, in Colombo today (22).

A six-member Presidential Commission of Inquiry was appointed by an Extraordinary Gazette Notification on February 24, 2021 to investigate, and report on various allegations and alleged irregularities in the Customs.

After nearly a year of consultation with customs officials, customs unions, government and private sector officials, clients and the public, the Commission has prepared a final report comprises of 117 recommendations and 530 pages, the PMD said.

The report includes recommendations on how the corporate, administrative and operational processes of Sri Lanka Customs can be effectively and efficiently carried out in the discharge of responsibilities.

The President instructed that the report be referred to Parliament as early as possible, the statement said.