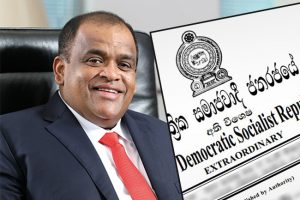 A Gazette Extraordinary has been published on Monday (June 27), specifying the duties, functions and institutional & legal framework of the Ministry of Investment Promotion.

The ministry will oversee the formulation, implementation, monitoring and evaluation of policies, programmes and projects, in relation to the subject of investment promotion and those subjects that come under the purview of departments, statutory institutions and public corporations under its purview, based on the national policies implemented by the government, and in accordance with the policy statement “Vistas of Prosperity and Splendour”.

It is also tasked with establishing the Colombo Lotus Tower as a business model and promote it as a Tourist Centre.

Business magnate MP Dhammika Perera was sworn in as the Minister of Investment Promotion on the 24th of June, before President Gotabaya Rajapaksa.

Perera’s name was proposed to the Election Commission to fill the National List parliamentary seat vacated by the resignation of former Finance Minister Basil Rajapaksa.

Accordingly, the election body gazetted his name on June 10, as a Member of Parliament from Sri Lanka Podujana Peramuna (SLPP). – ada derana