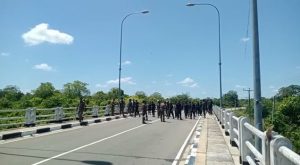 Sri Lanka Police says that around 600 inmates of the Kandakadu rehabilitation centre at Welikanda have escaped following a tense situation due to the death of an inmate last evening (28).

Police spokesman SSP Nihal Thalduwa said that army and police personnel have been deployed to control the situation and apprehend the inmates who have escaped.

He stated that a group of inmates had resorted to unruly behaviour following the death of an inmate detained at the centre while the tense situation within the premises had continued from last night until early this morning (29).

At around 8.00 a.m. today a large number of inmates had reportedly breached the two main entrance gates and escaped from the centre.

Sri Lanka Police and the Army have launched a joint operation to apprehend the inmates who had escaped, the police spokesman said. – ada derana