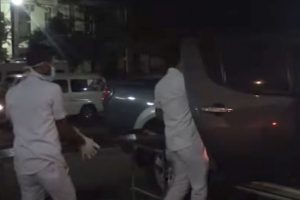 Veteran actor Jackson Anthony who was hospitalised following a motor accident yesterday (July 02), has been transferred from the Anuradhapura Teaching Hospital to the National Hospital in Colombo.

According to hospital sources, the veteran actor is slated to undergo surgery there.

Jackson Anthony and two other people were wounded after the vehicle they were travelling in collided with a wild elephant at Thalawa last night.

They had been on their way back after finishing filming at the Haththikuchchi Viharaya in Galgamuwa when the vehicle crashed against a wild elephant.

According to reports, the brother of the veteran actor is also among those who were injured.

The vehicle was severely damaged in the crash and the police suspect that the wild elephant might also have been critically wounded.

Further investigations into the accident are being carried out by the Thalawa Police. – ada derana