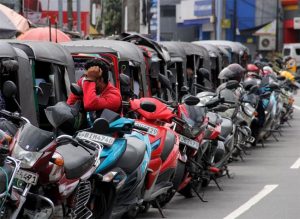 The daily life of the general public is at risk of being further disrupted relative to the last week due to the limitation of transport services as a result of the fuel crisis.

It is reported that not only the public transport bus services, but also the transport of essential food items has been seriously affected by the prevailing fuel crisis.

As a result, the government employees have limited their attendance and reporting for duties while the limitations are being applied to the private and banking sector too.

Meanwhile it is also reported that many issues have arisen within the medical supplies and ambulance services of hospital due to the fuel shortage.

The President of Government Nursing Officer’s Association, Saman Rathnapriya says although several suggestions have been made to the government for an appropriate method of calling health sector workers to the service, there has not been any proper response on the issue yet.

At the same time, the Secretary of the All Island Private Bus Owners’ Association, Anjana Priyanjith stated that the number of buses operating today will be further reduced up to five percent as the private buses do not receive required amounts of fuel either from the SLTB bus depots, nor from Lanka IOC.

Gamunu Wijeratne, the President of the Private Bus Owners’ Association (LPBOA) also commented on the issue stating that short-distance bus operators wait in fuel queues for around 4 days to pump 40 litres of diesel, however they can only run for one day with that fuel.

“That is the reason why there are no buses today. We have informed the issue to the Prime Minister and also Minister Kanchana yesterday. He said that the required fuel amounts are already sent to the bus depots. But there are some issues in distributing this properly by the SLTB. There is no problem if SLTB takes care of proper distribution.”  – ada derana