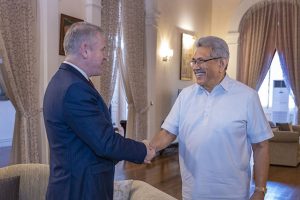 High Commissioner Holly revealed this at a meeting held with President Gotabaya Rajapaksa today (04) at the President’s House in Colombo, the PMD reported.

Australia is well aware of the most challenging economic crisis in Sri Lanka. Australia offered 50 million dollars as the highest amount of humanitarian aid given to Sri Lanka by a single country.

He also mentioned that this is just the beginning and pledged continuous support to Sri Lanka in other fields.

Further discussions were carried out to strengthen the understanding regarding maritime issues and illegal immigrants. The High Commissioner mentioned that special attention will be paid to the promotion of Australian investment in Sri Lanka.

President appreciated Australia’s close cooperation with Sri Lanka during the past 75 years of diplomatic relations between the two countries, the release said. – ada derana