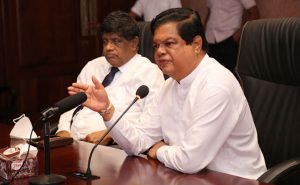 Sri Lanka Railways trade unions have decided to call off their trade union action after discussions with the Minister of Transport this afternoon (06).

After directing his attention to the issues faced by the railway employees, the Transport Minister instructed the Secretary to the ministry and the General Manager of Sri Lanka Railways to provide immediate solutions for these issues.

The meeting was held to discuss the inability of workers to operate certain trains as employees re unable to report to duty due to the fuel shortage.

Sri Lanka’s railway employees have also complained that they are in dire straits due the aggressive behavior of certain commuters.

Few incidents of attacks by passengers within the railway stations have also been reported this morning, said Sumedha Somarathna, the President of the Railway Station Masters’ Association.

Moreover, the employees of Panadura railway station were attacked today (06), while the Railway Station Masters have decided to refrain from issuing the tickets in Fort, Maradana, Panadura, Kollupitiya and Ragama railway stations.

“When the trains are not available, the distressed passengers vent their anger through the Station Masters. The Station Masters of Maradana, Fort, Ragama, Kollupitiya and Panadura railway stations have asked for our safety and therefore we have withdrawn at the time. We have also requested military protection through the head of the Department.”

Meanwhile, the Railway Authorities state that the railway operations which were disrupted by the fuel shortage will be normalized by this evening.

50 percent of operating office trains have been disrupted this morning, due to lack of fuel for the railway employees to attend to their work.

Accordingly, the Deputy General Manager of the Railways, Gamini Senevirathne mentioned that only 26 trains out of 48 total office trains were running this morning.

Passengers were left stranded due to the cancellation of trains and some people were even travelling on the train engines, according to Ada Derana reporters.

However, Mr. Gamini Senevirathne stated that several trains are currently running late and the situation can be restored by this afternoon. – ada derana