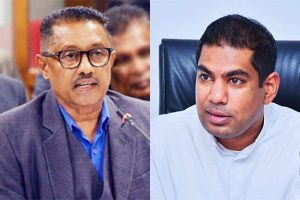 Minister of Power & Energy Kanchana Wijesekara today (July 08) urged the Committee on Public Enterprises (COPE) to inquire into the allegations levelled by the Chairman of Public Utilities Commission (PUCSL) with regard to the fuel prices and procurement process.

In a tweet, the lawmaker asked the committee’s chairman Prof. Charitha Herath to summon the Ceylon Petroleum Corporation (CPC) officials and him before the COPE to look into the allegations.

Minister Wijesekara stressed that an inquiry should be conducted to determine whether the PUCSL chairman has misled the COPE and the members of public through his claims.

PUCSL chairman, in a personal statement made at a recent COPE meeting, claimed that petrol and diesel can be sold for around Rs. 250 in Sri Lanka.

The COPE had convened a meeting on July 06, under the chairmanship of Prof. Charita Herath to examine the Auditor General’s report for the years 2018 and 2019 and current performance of the electricity sector regulator.

According to the PUCSL chairman, this was revealed in the statistics on the import prices of petroleum and the taxes levied by the government.

He pointed out that petrol and diesel can be provided in Sri Lanka for Rs. 200 less than the current price. also said the government has collected a tax of Rs. 280 for one litre of diesel imported on July 01. – ada derana

I would like to kindly request @charith9 to call CPC & myself to the CPOE to inquire into the allegations made by PUCSL Chairman on FuelPricing & Procurement. Inquiry should be held on if the COPE & the Public was misled by PUCSL Chairman or CPC on fuel pricing & any other matter