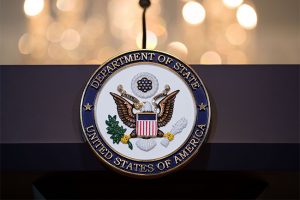 The United States has urged Sri Lankan authorities to work quickly to implement solutions to achieve long-term economic stability and address the people’s discontent regarding the worsening economic conditions.

A spokesperson for the U.S. State Department said Washington is closely following the developments in Sri Lanka.

The United States condemns any violence against peaceful protesters and journalists, the spokesperson said further, adding that Sri Lankan people have the right to peacefully raise their voices, and we call for the full investigation, arrest and prosecution of anyone involved in any protest-related violent incidents.

“We urge this government or any new, constitutionally-selected government to work quickly to identify and implement solutions that will achieve long-term economic stability and address the Sri Lankan people’s discontent over the worsening economic conditions, including power, food, and fuel shortages.”

Further, the United States called on the Sri Lankan parliament to approach this juncture with a commitment to the betterment of the nation not any one political party. – ada derana