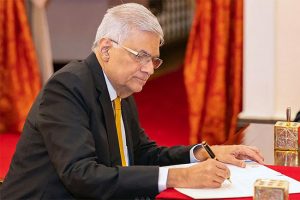 Following the official confirmation of Gotabaya Rajapaksa’s resignation from the presidency, Ranil Wickremesinghe is expected to swear in as the Acting President today (July 15) to fill in the vacated position.

Meanwhile, the Office of the Speaker of Parliament announced last night that a letter of resignation from President Rajapaksa was received through the Sri Lankan High Commission in Singapore.

However, an official statement in this regard will be made by Speaker Mahinda Yapa Abeywardena today after verifying the authenticity of the letter and finalizing all legal matters.

Pursuant to Article 38 of the Constitution, the Head of State can step down by submitting a resignation letter signed by him to the Speaker of Parliament.

The resignation letter was sent after the embattled President landed in Singapore after departing the Maldives on board a Saudia Airlines flight yesterday. His final destination still remains uncertain.

With regard to President Rajapaksa’s arrival, the Singapore Foreign Ministry said that neither “had he asked for asylum, nor had he been granted asylum” in the country. – ada derana