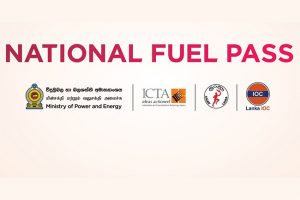 The Ministry of Power & Energy today (July 16) introduced the National Fuel Pass which allows the general public to purchase a guaranteed quota of fuel per week for their personal vehicles.

The fuel pass was launched with technical support of the Institute of Communication & Information Technology (ICTA), with the intention of easing the fuel queues.

A QR code will be allocated to each vehicle following the registration and verification of the chassis number, the vehicle registration number, the number plate and other details by the Motor Traffic Department (DMT).

The members of the public can obtain fuel twice a week according to the last digit of the number plate, using the QR code assigned to them.

The QR code can be kept as a screenshot on one’s mobile phone. Those who do not possess a smartphone can keep a printout of the QR code with them.

This will be the only pass that the government will allow people to purchase fuel, not only from Ceylon Petroleum Corporation’s filling stations, but also from Lanka IOC filling stations as well, the minister stressed.

However, the quota of fuel allocated to a vehicle is subject to change in line with the availability of fuel reserves in the country. A separate procedure will be introduced to supply fuel to essential services and public transport services.

The lawmaker stated that vehicles are registered under six categories used by the DMT: cars (including jeeps, SUVs and double cabs), motorcycles, three-wheelers, vans, lorries and buses.

Registrations are available from today (July 16) via the official website introduced by the ministry: fuelpass.gov.lk

However, only the registrations will be allowed from today, Minister Wijesekara added.

The date of commencement of the fuel pass system will be announced in due time once the registration process is completed.

The lawmaker said there challenges are expected in implementing this fuel pass system, but the excessive use of fuel has to be curtailed due, given the prevailing situation in the country. – ada derana