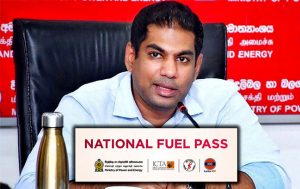 Sri Lanka’s Minister of Power and Energy says that the ‘National Fuel Pass’ will be upgraded in the next few days to give an option for Businesses and Organizations that operate multiple vehicles to register all their vehicles with the Business Registration Number.

In a twitter message, Minister Kanchana Wijesekera said each vehicle will be given a specific QR code after verification.

The Ministry of Power & Energy on Saturday introduced the National Fuel Pass which allows the general public to purchase a guaranteed quota of fuel per week for their personal vehicles.

The fuel pass was launched with the technical support of the Institute of Information and Communication Technology Agency (ICTA), with the intention of easing the fuel queues.

Accordingly, one vehicle can be registered under one National Identity Card (NIC), passport number or business registration number.

A QR code will be allocated to each vehicle following the registration and verification of the chassis number, the vehicle registration number, the number plate and other details by the Motor Traffic Department (DMT).

The members of the public can obtain fuel twice a week according to the last digit of the number plate, using the QR code assigned to them.

Meanwhile the minister says that the National Fuel Pass was developed with the assistance of leading tech companies in Sri Lanka and the ICTA without any cost to the Ceylon Petroleum Corporation (CPC) or the government.

He stated that glitches and negative comments were both expected. Thus, the request was made to register over a few days and commenced a few days before distribution commenced, he said. – ada derana