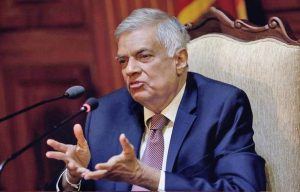 Newly elected President Ranil Wickremesinghe invited all parties in Parliament including the opposition to work together on a new strategy fulfilling the aspirations of the people.

Addressing the House after he was elected as President by a majority of votes in Parliament, he expressed his gratitude to fellow presidential candidates MPs Dullas Alahapperuma and Anura Kumara Dissanayake. – ada derana