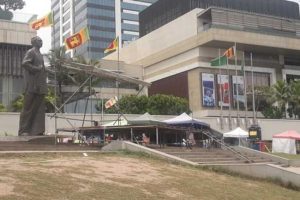 The order was issued after taking into account a request made by the Colombo Fort Police.

The police presented submissions to the, citing reports of impending damages to the statue by those who are engaged in protests there.

Accordingly, Magistrate Thilina Gamage decided to issue an order prohibiting anyone from gathering around a 50-metre radius distance of the statue. – ada derana