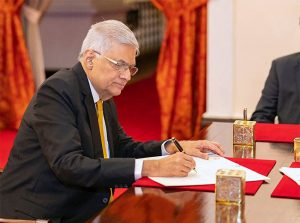 Ranil Wickremesinghe is to be sworn in as Sri Lanka’s 8th Executive President at the Parliamentary complex tomorrow morning (21 July).

Sri Lankan Parliament today voted acting president Ranil Wickremesinghe as the next President of the country. He won 134 of the total 219 votes that were found valid.

Following his victory, Wickremesinghe said that Sri Lanka is in a very difficult situation and that there are big challenges ahead.

While concluding his speech in the House, the President-elect also made a request to the Speaker to allow him take oaths as the President within the parliament premises.

Wickremesinghe became acting president last week after former president Gotabaya Rajapaksa fled on a military plane to the Maldives and then took a commercial flight to Singapore. – ada derana