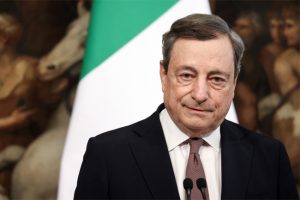 A year-and-a-half after he was appointed as Italy’s unelected head of a unity government, Mario Draghi has resigned as prime minister.

He told President Sergio Mattarella he was standing down after three parties in his government refused to back him in a confidence vote the night before.

The president asked him to remain as caretaker leader and early elections are expected this autumn.

Mr Draghi, 74, is a popular figure in Italy.

He was dubbed Super Mario for his handling of the eurozone crisis as head of the European Central Bank. In February last year, he was given the task of guiding Italy through the Covid pandemic and economic recovery, bolstered by a big EU package conditional on major reforms.

He first tendered his resignation a week ago when one of the parties in his broad-based government refused to back his economic package, prompting a political crisis.

President Mattarella asked him to stay in the post and, on Wednesday, he told the upper house of parliament he would continue if the political parties were ready to back a strong, cohesive government with a “new pact of trust”.

For several hours Italians waited with baited breath, before three of the parties decided they would not back him in a vote of confidence.

Before heading to the presidential palace, the Quirinale, on Thursday morning, Mr Draghi addressed the lower house of parliament and was given a round of applause. “Thank you for all the work done in this period,” he told MPs.

The Milan stock market dropped a further 2% on Thursday after falling the previous day too.

President Mattarella said his government would remain in office to handle current affairs, but did not say exactly what would happen next. Elections were due to take place in the first half of 2023, but will most likely be brought forward to October.

The parties set to benefit most from the political crisis include the far-right League and centre-right Forza Italia and both snubbed Mr Draghi in Wednesday night’s crunch vote.

However, it is the far-right Brothers of Italy (FdI) party that is topping the opinion polls, and leader Giorgia Meloni is being tipped as a possible prime minister. She was not part of the unity government and has repeatedly called for snap elections over the past week.

“I have my own ideas on how this nation should be governed, what should be done, what its industrial strategy should be,” she said.