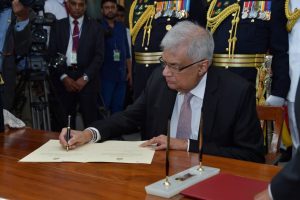 Ranil Wickremesinghe took oaths as the 8th Executive President of Sri Lanka a short while ago. He was sworn in before Chief Justice Jayantha Jayasuriya at the parliament complex.

Sri Lanka’s 225-member parliament voted Wickremesinghe in as the new Head of State with a total of 134 votes cast in his favour. He faced off SLPP’s dissident MP Dullas Alahapperuma who was polled second with 82 votes. NPP leader MP Anura Kumara Dissanayaka secured only 03 votes.

Wickremesinghe, a six-time former prime minister had the backing of the Sri Lanka Podujana Peramuna (SLPP), the largest bloc in the parliament.

Two parliamentary members had abstained from voting while four of the 223 votes cast by the members were meanwhile found invalid.

The procedure for electing a succeeding president by Parliament is provided in the Constitution and the Presidential Elections (Special Provisions) Act (No. 2 of 1981), in the event of a vacancy in the office of the President before the end of the term. To be elected for the office of succeeding president, a candidate should get 50% or more votes from the valid number of votes.

Following the conclusion of the counting process, Secretary-General of Parliament, Dhammika Dasanayake announced to the House that Ranil Wickremesinghe was been elected as the 8th Executive President.

Pursuant to the provisions of the Presidential Elections (Special Provisions) Act (No. 2 of 1981), Wickremesinghe’s appointment was published in a special gazette notification last evening.

Wickremesinghe is thus qualified to hold the office of the President for the remaining term of the presidency, which was left vacant after his predecessor Gotabaya Rajapaksa stepped down last week. Wickremesinghe was appointed as the caretaker president, Rajapaksa fled the country on a military plane to the Maldives and then took a commercial flight to Singapore.

He has held the office of prime minister six times although he never completed a term. His latest and shortest term in office as the prime minister was when former President Gotabaya Rajapaksa appointed him to the position on July 13 this year, after his brother Mahinda Rajapaksa was forced to step down amidst growing public agitation over economic mismanagement and corruption allegations.

Ranil Wickremesinghe was elected to the 9th Parliament on June 23rd, 2021 as a National List Member representing the United National Party.

An alumnus of the Royal College of Colombo, Wickremesinghe was later selected to the Faculty of Law of the University of Colombo and sworn in as a lawyer.

In 1977, he was elected as a Member of Parliament for the first time and was the youngest cabinet minister in the J.R. Jayewardene government where he held the position of Minister of Youth Affairs and Employment.

He was the Minister of Foreign Affairs at the age of 28, and later served as the cabinet minister for Youth Affairs, Education and Industry, Science and Technology.

Following the resignation of Gotabaya Rajapaksa from the office of President, he became the Acting President from 14th as per the Constitution. – ada derana