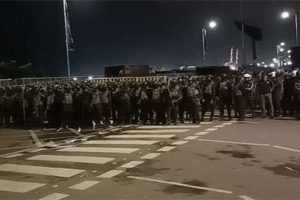 A tense situation was reported last night (July 21) as the armed forces stormed the protest site at the Galle Face Green to clear the Presidential Secretariat and its main entrance of demonstrators.

There were reports of civilians being assaulted by the troops as they removed the protesters from the area.

The ambassador of the United States, Julie Chung called for restraint by authorities and immediate access to medical attention for those who were injured.

“Deeply concerned about actions taken against protestors at Galle Face in the middle of the night,” she tweeted.

Meanwhile, Canadian High Commissioner David McKinnon also stressed that it is crucial the authorities act with restraint and avoid violence.

British High Commissioner to Sri Lanka, Sarah Hulton tweeted that she is “very concerned about reports from the Galle Face protest site.”

“We have made clear the importance of the right to peaceful protest,” the envoy said further. – ada derana