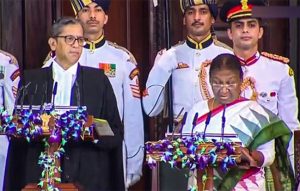 Droupadi Murmu on Monday took oath as the 15th president of India at the Parliament’s Central Hall, Indian media reported.

Murmu was administered the oath by Chief Justice of India NV Ramana. Addressing the nation soon after taking the oath, President Murmu said that the trust and support of the people were her greatest strengths.

She is the second woman President of the country, first-ever tribal woman to hold the highest Constitutional post and the first President to be born in independent India

In her first first address as President at the Central Hall of Parliament, Droupadi Murmu said, “While Standing in the Parliament – the symbol of expectations, aspirations and rights of all Indians – I humbly express my gratitude to all of you. Your trust and support will be a major strength for me to carry out this new responsibility.”

She also said that, “I am fortunate to have got this opportunity to serve during the 75th year of independence.”

She also added that reaching the Presidential post is not personal achievement but an achievement of every poor in India.

“My nomination is evidence that the poor in India can not only dream but also fulfill those dreams,” she said.

“I am the first President of the country who was born in independent India. We will have to speed up our efforts to meet the expectations that our freedom fighters had with the citizens of independent India,” President Droupadi Murmu said.

The swearing-in ceremony took place in the Central Hall of the Parliament. Chief Justice of India NV Ramana administered the oath of the office.

Earlier in the day, Murmu paid tributes to Mahatma Gandhi, father of the nation, at Raj Ghat and also visited Rashtrapati Bhavan where she was welcomed by former President Ram Nath Kovind and his wife Savita Kovind.

The former Jharkhand Governor marked a historic victory over Opposition’s presidential candidate Yashwant Sinha in the president polls on July 22.

The results for presidential election were declared on Thursday in which it was revealed that Murmu bagged 2,824 votes against her opponent Yashwant Sinha who only secured 1,877 votes. A total of 4,809 MPs and MLAs cast their votes in the polling on July 18.

After the declaration of results, Secretary General of Rajya Sabha and the Returning Officer for Presidential Election 2022, PC Mody handed over the certificate to President-elect Droupadi Murmu at her residence in the national capital.