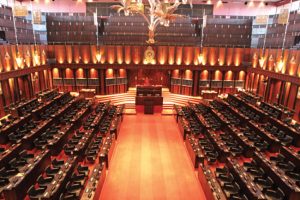 A parliamentary debate on the proclamation of the state of emergency declared by President Ranil Wickremesinghe as the Acting President under the Public Security Ordinance is scheduled for tomorrow (July 27).

The parliament will meet at 10.00 a.m. tomorrow. The debate on the proclamation of the state of emergency will continue until 4.30 p.m.

This proclamation was made by the then-Acting President through Special Gazette No. 2288/30 dated July 17, 2022. According to the legal provisions, if the approval of the Parliament is not obtained within 14 days for the said proclamation, it will be cancelled.

It is stated in the gazette that this proclamation was issued in accordance with the powers vested in the President in terms of the Public Security Ordinance to ensure public security and the protection of the public order and the maintenance of supplies and services essential to the life of the community.

Meanwhile, Wajira Abeywardena, who was nominated by the Election Commission as the National List member of the United National Party for the MP seat left vacant due to the swearing-in of current President Ranil Wickramasinghe, will be sworn in as a Member of Parliament tomorrow morning. – ada derana