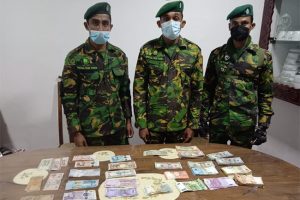 The Police Special Task Force (STF) has arrested a youth who transfers foreign currency overseas through the informal money transferring method of ‘Undiyal’.

The 27-year-old was taken into custody in the area of Galbokka in Weligama in a raid carried out last night (July 27).

The arrestee and the seized foreign currency have been handed over to the Weligama Police for further investigations. – ada derana