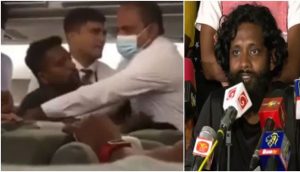 Activist Dhaniz Ali, who was recently arrested for forcibly entering the Rupavahini Corporation and disrupting the broadcast, has been further remanded until August 15 by the Colombo Chief Magistrate’s Court.

He was arrested on the night of July 26 while trying to leave for Dubai on a flight from the Bandaranaike International Airport (BIA).

He was produced before the Colombo Fort Magistrate’s Court the following day and was ordered remanded until the 05th of August.

The 31-year-old, a resident of Webada in Kurunegala, was taken into custody in connection with the forcible entry to Sri Lanka Rupavahini Corporation (SLRC) and attempt to disrupt telecasts on July 13.

On July 13, a group of protesters including Dhaniz Alia forced their way into the state-owned media institute, demanding that only anti-government protests-related news be broadcast thereafter.

Two of the protesters then appeared on a live interview, after which the channel suspended its live and recorded telecasts for brief period of time.

The police later initiated investigations into the incident to identify the protesters in question.

According to a statement issued by the police, the Colombo Fort Magistrate’s Court had previously issued a warrant on Ali for failing to appear before the court over a case filed against a protest staged in front of the Finance Ministry on June 20, when a delegation of the International Monetary Fund (IMF) met with a group of ministerial officials.

Further, he had been released on bail by the court over a case against alleged damaged caused to public property during a demonstration staged opposite the Police Headquarters on June 09. – ada derana