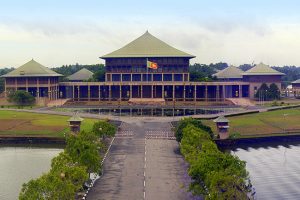 The ceremonial opening of the third session of the Ninth Parliament is scheduled for tomorrow (August 03).

According to the Department of Communication of the parliament, President Ranil Wickremesinghe has given directives to commence the new parliamentary session without a guard of honour salutes and ceremonial horses. Meanwhile, the presidential flag will not be hoisted at the event.

The second session of the Ninth Parliament was prorogued through an Extraordinary Gazette notification issued by the President on July 28, 2022, in accordance with the powers vested in him with Article 70 (1) of the Constitution.

When the Parliament is prorogued, the questions and motions, which were not considered by the parliament up until then, are abolished and the Members of Parliament thus have to take it up in accordance with the standing orders.

Furthermore, the committees other than the Liaison Committee of Parliament, Committee on High Posts and Select Committees will be reconstituted following the beginning of the new session.

Meanwhile, Secretary-General of the Parliament Dhammika Dasanayake has called on all MPs in writing to attend the third session of the Ninth Parliament.

Upon entering the Chamber, President Wickremesinghe will preside over the ceremonial sitting of the new parliamentary session.

Thereafter, the General-Secretary of Parliament will read out the proclamation proroguing the parliament and summoning the meeting of the House.

As per the Order Paper of the House, the parliament will be adjourned until 1.00 p.m. on August 09.

How does the prorogation of the Parliament happen?

Who has the authority to Prorogue?

In terms of Article 70. (1) of the Constitution, the Executive President has full powers to summon, prorogue and dissolve Parliament.

How to decide the date for the commencement of the next session?

Does the prorogation of a Parliament cease all its functions?

Many are of the opinion that when the Parliament is prorogued, all its functions will cease. However, that is not true. During the prorogation, the Speaker continues to perform his duties. At the same time, even if the Members of Parliament do not participate in the Parliamentary meetings, they remain in their positions. But at the end of a session, all the activities that were going on in the Parliament at that time will be suspended and the entire processes that were ongoing in the chamber at that time will be temporarily ceased unless it’s an impeachment.

Though a Bill, motion or question related to the same issue cannot be presented for the second time during the same session, after prorogation, there is the possibility of moving it to the next session.

“All matters which, having been duly brought before Parliament, have not been disposed of at the time of the prorogation of Parliament, may be proceeded with during the next session.” As it is mentioned in Article 70. (4) of the Constitution.

In the said provision of the constitution, due to the end of session of parliament, the functions to be taken in the future will not be suspended. Following the new session of the Parliament, the functions to be carried out can be resumed. All matters which, having been duly brought before Parliament, have not been disposed of at the time of the prorogation of Parliament, may be proceeded forth during the next session. The government business to be taken forward is decided by the leader of the house and if it is a private member’s Bill or motion, it has to be presented afresh.

At the time of commencement of a new session of the Parliament, if it is necessary to continue the business on the order paper of the House, it is required to be listed again.

Do all Parliamentary committees cease to function when Parliament is prorogued?

Many question what happens to the committees that were there when the parliament ends a session. According to Standing Orders No. 109, 111(2), 124(5), 125 (1) of the Parliament, all committees except the Committee on High Posts, Liaisons Committee, Sectoral Oversight Committees and Select Committees should be reconstituted at the time of resumption of the new session of the Parliament. In the case of Standing Orders 125 (1), members are appointed to the Liaisons Committee by the position (according to the Speaker, Deputy Speaker) and thus no change is made.

According to Standing Order No. 114 of the Parliament, the Committee of Selection is appointed a new at every new session. All the following committees for special purposes will be abolished at the end of the session of the Parliament.

How does a new Parliamentary session begin?

In the past it was known as the ‘Throne Speech’ and was delivered by the Governor General. Since 1978, the policy statement presented by the President in the Parliament of the Democratic Socialist Republic of Sri Lanka has not been debated or put to a vote until now.

According to the Parliamentary records, it is revealed that the Parliament has been prorogued about 50 times since 1947. Since 1978, more than 25 sessions have been held and they are as follows: