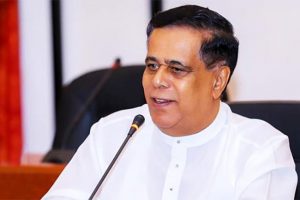 Former Minister Nimal Siripala de Silva has been acquitted of bribery charges levelled against him by Opposition Leader Sajith Premadasa during a recent parliamentary session.

On July 22, a three-member committee was recently appointed by President Ranil Wickremesinghe, upon the request of the former minister, to probe the allegations.

The panel looked into the matter raised by the Opposition Leader, based on the news item published in the social, print and electronic media accusing a cabinet minister of demanding a bribe from Japan’s Taisei Company.

The committee report on the incident was handed over to Presidential Secretary Saman Ekanayake on July 31.

Accordingly, the committee members have found that the former minister is not guilty of the accusations levelled against him.

Nimal Siripala de Silva had temporarily resigned as the Minister of Ports, Shipping and Aviation Services pending the completion of the inquiry. – ada derana