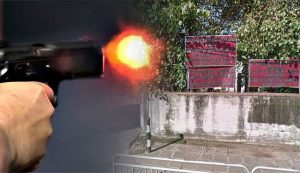 A shooting incident is reported inside the Mount Lavinia court premises this afternoon (Aug 04).

Police Spokesman SSP Nihal Thalduwa said a person who was among the crowd had opened fire at a suspect who was in the witness stand at the Mount Lavinia Court and fled the scene.

However, no one was injured in the shooting and a search is in progress to apprehend the gunman, he said. – ada derana