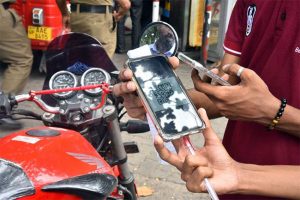 Minister of Power and Energy Kanchana Wijesekera today requested users of the National Fuel Pass not to display their respective QR code anywhere visible to others.

He requested users of the national fuel pass to keep their personal QR codes in a secure place to make sure no one else uses it illegally.

In a twitter message, the minister also said that the option to delete a current profile feature in National Fuel Pass system is available now and the option to register again.

Meanwhile the highest number of fuel stations (1,004) using the QR code system in a 24-hour period was recorded yesterday, according to Minister Wijesekera.