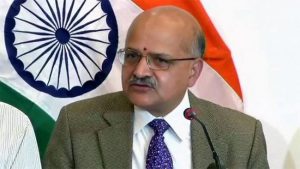 NEW DELHI (Reuters) – India expects bilateral trade worth $8-9 billion with Russia and Sri Lanka in the next two months after it allowed international trade in rupees, India’s trade secretary said.

The Reserve Bank of India last month allowed importers and exporters to pay in the partially convertible rupee, a move widely seen as making trade with Russia and South Asian neighbours easier instead of relying on dollars.

“The rupee-denominated sales will be a big, big advantage,” B.V.R. Subrahmanyam told reporters late on Tuesday. “I see in the next two months $8-$9 billion of trade with Russia and Sri Lanka.”

He did not give a break down in trade by country.

India’s imports from Russia, mainly crude oil, jumped nearly five times to more than $15 billion between the end of July and Feb. 24 when Russia invaded Ukraine, compared to the previous year, according to a source with direct knowledge of the matter.

But exports fell to $852.22 million from $1.34 billion in the same period, due to the lack of a payment settlement mechanism with sanctioned-hit Russia.

Latest trade figures between India and Sri Lanka, which is in economic crisis, were not immediately available.

India has refrained from condemning Russia, with which it has longstanding political and security ties, while calling for an end to violence in Ukraine. New Delhi defends its purchases of Russian goods as part of an effort to diversify supplies and argues a sudden halt would jack up world prices and hurt its consumers.

India reported a record trade deficit of $31.02 billion for July, three times higher than in the same period last month, due to a fall in exports and high imports, according to the latest preliminary trade data.

Subrahmanyam said the government was working on new trade deals with countries like the United Kingdom that would boost its exports and offset demand weakness in some of its markets.