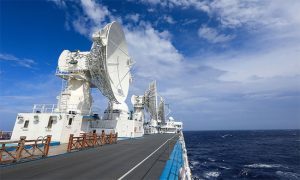 The Chinese Embassy in Sri Lanka will hold a welcoming ceremony for the arrival of the Chinese Yuan Wang 5 scientific research vessel at the port of Hambantota, a source close to the matter told the Global Times on Monday.

“The Chinese Embassy in Sri Lanka will hold a simple but warm welcoming ceremony on the premise of epidemic prevention and control,” the source said.

According to Sri Lanka’s Ministry of Foreign Affairs, the Yuan Wang 5 was cleared to dock at Hambantota port from Tuesday to August 22 after the government “engaged in extensive consultations at a high level through diplomatic channels with all parties concerned,” Bloomberg reported on Sunday.

A separate source told the Global Times on condition of anonymity that Yuan Wang 5 is China’s third-generation space-tracking ship. Survey vessels are an important part of the aerospace measurement and control network. Compared with land surveying stations, survey vessels can flexibly select and deploy stations on the vast oceans, and maneuver emergency monitoring and control, the source said.

The vessel was scheduled to dock at the port of Hambantota on August 11, but India had continuously pressured Sri Lanka to defer the arrival of the Chinese vessel, citing so-called national security concerns.

In response, Wang Wenbin said at a routine media briefing on August 8 that Sri Lanka is a transportation hub in the Indian Ocean, and scientific research vessels from various countries including China have made port calls in Sri Lanka for replenishment. China always exercises freedom of the high seas in accordance with law and fully respects coastal countries’ jurisdiction over scientific research activities in waters under their jurisdiction.

It is completely unjustified for certain countries to cite so-called security concerns to pressure Sri Lanka, Wang said, noting that as the country grapples with economic and political difficulties, grossly interfering in its normal exchange and cooperation with other countries exploits its vulnerability, which is morally irresponsible and goes against the basic norms governing international relations.