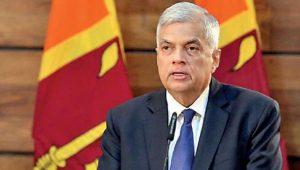 President Ranil Wickremesinghe states that the emergency regulations will not be extended further as the situation of the country is getting back to normal and that it will lapse by the end of the week.

“But that is not enough. We have to have an attitudinal change and if we do that, then this country will have a future,” said the president, speaking at the 2022 award ceremony of the “Organisation of Professional Associations of Sri Lanka which was presided over by him.

President Wickremesinghe also stated that discussions are underway with the International Monetary Fund (IMF) to finalize a staff-level agreement, while there are two groups that prevail now, the West which is planning to provide a haircut and China which would like to give additional loans to pay off existing loans.

“We are talking with Japan about how this could be achieved. If we move fast, this will be a short way and if we still keep arguing, then we all are going to suffer.”

He also acknowledged that no other country in the world has allowed young people to take part in oversight committees.

In this parliament, we must have the capability of coming up with a new system. “We cannot be passing it to others. The baby is ours. We’ve taken it, we’ve got to carry it. And if possible, from there, [we should] go ahead to a new constitution.

“We are also looking at the Diaspora. It is a strength; it is also a source of investment,” he said further, noting that the country needs to sort out the issues among ethnic groups.

The President also mentioned that the government has paid attention to establishing a separate office to deal with the Diaspora in order to obtain its support. – ada derana