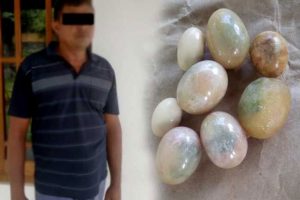 A suspect in possession of 08 elephant pearls (Gajamuthu) has been arrested following a raid carried out by Police Special Task Force (STF) personnel in the Uragasmanhandiya area.

The elephant pearls seized in the operation, carried out based on information received by STF intelligence officers, are estimated to be worth over Rs. 10 million.

The arrested suspect, a 43-year-old resident of Uragasmanhandiya, has been handed over to police for onward action. – ada derana