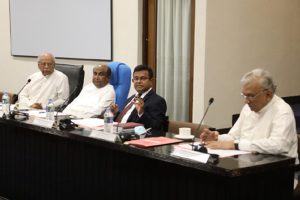 Members have been appointed for the two sub-committees that were decided to be appointed in the inaugural meeting of the National Council, at its second meeting which was held yesterday (Oct 06) at the Parliament Complex.

The second meeting of the National Council, which was established according to a motion moved to Parliament by Prime Minister Dinesh Gunawardena, was chaired by Speaker Mahinda Yapa Abeywardena last evening, the Department of Communications of the Parliament reported.

The two sub-committees were decided to be appointed to determine the general priorities of the Parliament in relation to the formulation of short-, medium- and long-term national policies and to reach an agreement on the short and medium-term programs related to economic stabilization.

It has also been decided to hold a meeting between the two sub-committees today (Oct 07), said the Department of Communications of the parliament.

Meanwhile, the Department of Communications of Parliament stated that a special political party meeting of parliament is scheduled to be held this evening under the chairmanship of the Speaker. – ada derana