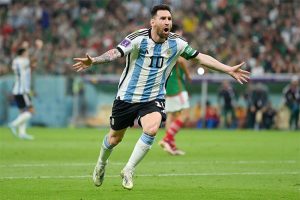 Lionel Messi reignited Argentina’s World Cup challenge with a superb goal in a 2-0 win over Mexico on Saturday as Kylian Mbappe’s double fired France into the last 16.

Rocked by a stunning upset defeat against Saudi Arabia on Tuesday, Argentina faced Mexico knowing that a defeat would send them crashing out of the tournament.

But Messi breathed fresh life into Argentina’s campaign with his eighth World Cup goal in his fifth appearance in the finals.

Rising star Enzo Fernandez made the game safe with a magical curling strike in the 87th minute, sparking wild celebrations amongst Argentina fans at the glittering Lusail Stadium.

“We knew that today we had to win that another World Cup was starting for us, and we knew how to do it,” Messi said.

“We can’t give up now,” said Messi. “We have all the finals to play. We can’t make mistakes. We knew we had to win, that another World Cup was starting for us, and we knew how to do it.”

Elsewhere on Saturday, France became the first team to reach the last 16 after two goals from star striker Mbappe secured a 2-1 victory over Denmark.

Mbappe, one of the heroes of France’s march to the 2018 World Cup title, ensured Les Bleus would be the first team into the knockout rounds after popping up with an 86th-minute winner to break Danish hearts at Stadium 974 in Doha. His 31 goals for the national team now equal Zinedine Zidane’s haul.

“For us, it’s ideal, we have six points so we’re sure to qualify after two matches,” France coach Didier Deschamps said.

“We’ll appreciate that before the next match in four days. It brings tranquility and the assurance that we qualify.”

French duo Gabriel Martin and Mehdi Balamissa cycled 7,000km to Qatar in support of Les Blues. It took the duo three months to ride from the Stade de France in Paris to Lusail Stadium in Doha, where they hope France will retain the World Cup, reported fifa.com.

It was a World Cup reality check for the Saudis following their stunning win over Argentina.

“The importance of the goal and how I scored it made all my dreams from childhood come true,” said Lewandowski.

The 34-year-old was overcome with emotion having capitalized on a blunder by midfielder Abdulelah Al-Malki.

“I think the older I get the more emotional I get,” Lewandowski said. “I’m aware it might be my last World Cup and I wanted to be able to say that I’ve played and scored at World Cups.

“The result is most important, but getting both is great.”

Goalkeeper Wojciech Szczesny was the hero for Poland, however, producing a stunning double save in the first half.

He first denied Salem Al-Dawsari from the penalty spot, then made a stunning stop to keep out the rebound.

(With input from AFP)