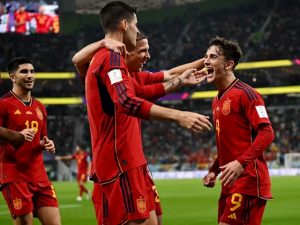 The match against Spain was tough for Germany. Spain, who beat Costa Rica by 7 goals in the first match, did not perform like that. Shocked Germany with accurate passes and quick moves but struggled to score.

Neither team scored in the first half. Spain itself has made significant strides. Germany had one through Rudiger but the referee called it offside through VAR.

Both the goals of the match were scored in the second half. Substitute Alvaro Morata gave Spain the lead in the 62nd minute. Germany responded with another substitution.

Nicklas Fulkrug opened the net for Spain in the 83rd minute, 20 minutes after the first goal was scored. Germany are still bottom of the group on points table.

Their next goal is to win against Costa Rica by a huge margin.

A stunning win for Croatia

In another match at the World Cup on Sunday, Croatia came from behind to defeat Canada by four goals to one.

Canada was eliminated from the World Cup with their second consecutive loss.

Canada has become the second team to be eliminated from the World Cup after the hosts Qatar.

Canada shocked Croatia in the second minute by scoring their first goal of the World Cup.

Alphonso Davies scored the goal. But soon Croatia started to fight back.