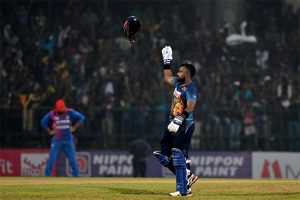 Sri Lanka have tied the three-match ODI series by 1-1 at home against Afghanistan by chasing a record target in Pallekele on Wednesday (November 30).

Young Dunith Wellalage and Charith Asalanka are the heroes for Sri Lanka. With that, the series ended in equal as the second ODI ended in a no result due to rain.

Chasing a big target of 314 runs, Sri Lanka openers- Pathum Nissanka and Kusal Mendis gave Sri Lanka a perfect start with a 101-run partnership. But after their dismissal in quick succession, the hosts fall under pressure.

Nissanka scored 35 runs from 55 balls while Kusal hit a half-century and scored 67 runs from 61 balls with 8 fours and a six.

Asalanka then made three effective partnerships starting with Dinesh Chandimal, Dasun Shanaka in the middle, and Wellalage in the end. Chandimal scored 33 runs and Shanaka scored 43 runs.

Star spinner of Afghanistan, Rashid Khan bowled really well in the death overs but still, Asalanka and Wellalage picked up a memorable win for Sri Lanka from a position where they needed 47 runs in the last 5 overs.

Earlier, batting first, Afghanistan started off shakily as they lost 3 wickets inside the team’s 57 runs. Then, it was all about young Ibrahim Zadran and Najibullah Zadran’s show. They put on a 154-run partnership for the fourth wicket to tackle the initial blow and gave Afghanistan a big total.

Though Najibullah was dismissed after scoring 77 runs from 76 balls with 8 fours and a six, Ibrahim stayed till the end.

He got out off the last ball of the Afghanistan innings but before this, he smashed the highest ODI score by the visitor batter in Sri Lanka as well as for his country too. He scored 162 runs off 138 balls with 15 fours and 4 sixes. It was his third century in the eighth match of his career.

Kasun Rajitha was the pick of the bowlers for Sri Lanka with three wickets. Wanindu Hasaranga took two wickets also.