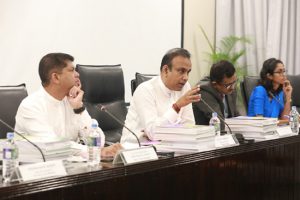 A proposal has been submitted to the Cabinet of Ministers pertaining to the acquisition of underutilized lands owned by large-scale plantation companies.

This was stated by Plantations Minister Dr. Ramesh Pathirana at the Ministerial Consultative Committee on Plantation Industries held recently.

Responding to concerns raised by Opposition Leader Sajith Premadasa regarding the number of lands owned by large-scale companies, Pathirana explained that several such companies no longer plant new plants, but instead maintain the existing cultivation or cut and sell the existing trees, without allowing for even a small extent of land to be utilized for public purposes.

Thus, legal measures will be taken in this regard in the future, the minister assured.

Premadasa too, assured his party’s full support to draft the necessary laws regarding the government’s acquisition of these underutilized lands.

The Opposition Leader further suggested that the lands be given to small-scale tea planters to uplift the country’s tea industry subsequent to the government’s acquisition of them.

Issues concerning the adequacy and market prices of tea fertilizers and pesticides and other matters concerning the plantation industry were also discussed. – ada derana