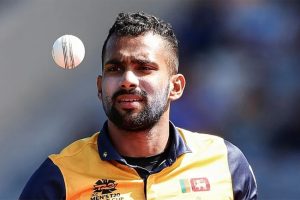 Chamika Karunaratne of the Kandy Falcons has been hospitalized following an injury during the ongoing match against the Galle Gladiators.

Karunaratne received a blow to his face during the fourth match of the LPL 2022 series while attempting a catch and the ball hit his face.

UPDATE: Accordingly, Karunaratne is currently undergoing surgery at a private hospital in Galle after suffering a blow to his face while attempting a catch, resulting in the all-rounder losing four teeth on impact.

The incident took place during the fourth match of the LPL 2022 series. – ada derana